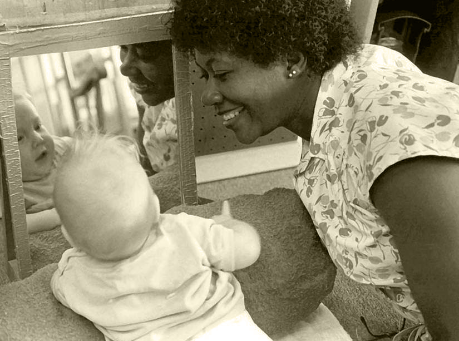 FPG’s Abecedarian Project represented a revolutionary approach in early childhood education. It differed from other childhood intervention projects because it began in early infancy and exposed children to a high-quality child care setting for five years—the entire period from birth through school entry—instead of the shorter durations typical of other projects.

Craig Ramey, the principal investigator of the original study, established a randomized trial to examine the extent to which intensive early childhood education could overcome the odds of developmental delays and academic failure for children born into low-income families. Following an experimental design, researchers recruited 111 at-risk children from families in Orange County, North Carolina. Although ethnicity was not a selection criteria, most children were African American and born between 1972 and 1977.

In creating the program, researchers designed their activities as playful back-and-forth exchanges between adult and child. “I had picked up on the game idea and decided it was a good way to make an educational program,” said FPG senior scientist emeritus Joseph Sparling. Sparling originally helped plan and administer the Abecedarian program, and with the curriculum’s co-creator Isabelle Lewis, he considered the milestones of child development, the findings of developmental research, and especially the developmental concepts of psychologist Lev Vygotsky. 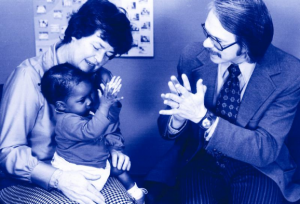 “We also tried to make the games fun,” said Sparling (left, with Isabelle Lewis), “so that the adults would keep using them.”

Sometimes the games integrated traditional activities, such as peeka-boo. Each child had an individualized prescription of games, and as children aged their activities became more conceptual and skill-based. Although the games focused on social, emotional, cognitive, and physical areas of development, they gave particular emphasis to language.

“We told the teachers that every game is a language game,” says Sparling. “Even if the activity focused mostly on motor skills, the teachers still needed to talk to the children and to elicit age-appropriate language from them.”

But could this approach actually work?